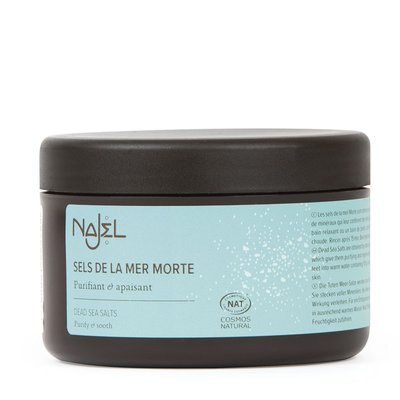 This product is labeled

100 % natural, Najel Dead Sea salt is obtained by the natural evaporation of water from the Dead Sea and does not undergo any chemical treatment. It thus retains all its properties. After it has been collected from the shores of the Dead Sea, the still-damp salt is dried, then sifted to the appropriate grain size.

Dead Sea salt is a natural exfoliant, full of minerals that give it purifying and regenerating properties. This exfoliant eliminates dead cells, and cleans deep down to remove impurities from the pores of the skin. Dead Sea salt purifies and revitalises the skin deep down, leaving you with a radiant complexion!

Dead Sea salt is also known for its soothing qualities and its ability to soothe inflamed and irritated skin. In high concentration, Dead Sea salt is well-known for its effect on certain skin problems. With its high megnesium and bromine content (bromine is a natural sedative that fights anxiety), Dead Sea salt soothes your skin and contributes towards your well-being.

Najel Dead Sea salt is used diluted in the hot water of a relaxing bath for the body or feet.

Other products of the brand:

See other product from this brand